I''ll be getting in some good ol' weed pulling / garden time tonight. We think the motherboard on the computer has died. I may not have photos to post until we sort out the situation. At least the hard drive seems to still be kicking. And who needs a computer on such a beautiful night!
Posted by Petunia's Gardener at 6:26 PM 1 comment: 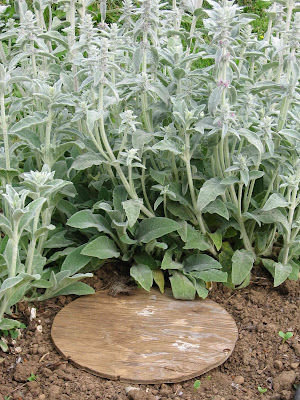 Matron asked where Petunia (aka the garter snake) lives in the garden. She has taken up residence under this board at the end of one of the garden rows. I suspect is it warmed by the afternoon sun and nicely compensates for the cool evenings. She'll let me look in on her maybe once an evening, but otherwise likes her beauty sleep after a busy day of slug eating. I even delayed planting squash one evening, because I didn't want to disturb her after she was all tucked in.

During the garden's first year, Petunia & Herbert moved in under a large piece of board (aka The Grand Estate) which we were using as a weed blocker. Later, we used the large wood for something, and hoped they would accept the practicalities of a nice condo. Why do I have wooden circle? Not really sure. It was in the wood pile when we moved here. They do make nice, movable stepping places in the garden beds.

I'll try to get Petunia to pose for a photo during one of our evening visits. She is in such a sleek outfit this year and I swear her stripes are pale blue and yellow.

The mason bee house has been put in place. And now another housing project has presented itself. Libby raised up a nice Wildlife Stack / Bug Hotel. I can see this being just the use for an assortment of tidbits I have around the barn. I've squashed my share of cabbage worms in the past two weeks, so maybe a Stack for better bugs will make up for all my squishing (satisfaction).
Posted by Petunia's Gardener at 9:10 PM 5 comments: 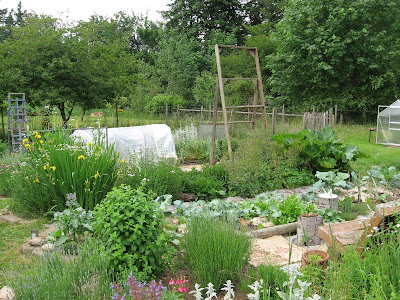 The garden on Tuesday night. Tomatoes & peppers are under the white cloche. Originally, we kept it closed, but for some time now we just leave both ends open. (see 2005 here!) 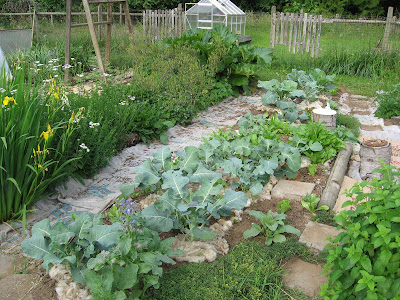 In this bed: broccoli (thanks-Karen!), Brussels sprouts (thanks-Molly!), lettuce and volunteer borage, calendula and dill. Once we slowed down the cabbage worm crop, the broccoli & BS plants are more content. The harvesting has started.
We've had to use the soaker hose during this dry spell. The wool mulch keeps stray water sprays off the plants and on the ground. While sheep straw has been my mulch of choice, I'm trying out the scrap wool we still had around (sheep moved away in 2006). It seems effective so far.
Click on the Monthly Photos label, below, to see other months.
Posted by Petunia's Gardener at 7:24 AM 5 comments: 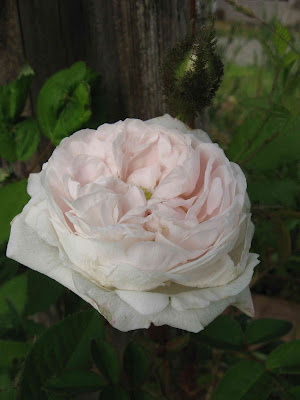 A previous neighbor had quite the plant collection, I understand, especially in the earlier years at the property. Two roses continue on quite happily in the fence line. This year, they are making a strong showing. Check out the extra prickly flower buds and stems.

Do you know what type they might be?
Do you think they will grow from cuttings? 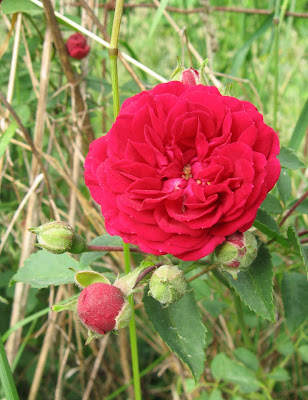 This second rose is very bright and dainty in person. I love their little surprise touch in their setting. 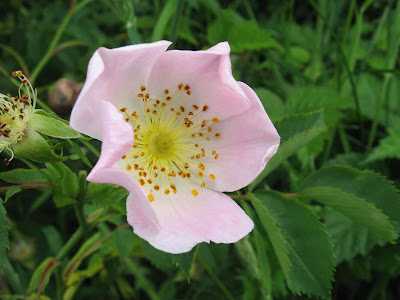 Above, is the wild rose that grows on our hillside. I'm happy it has also set up home on the other side of the path now also. 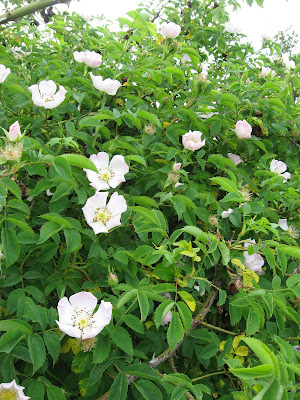 It has cascading branches and makes a nice hillside bush. It has nice year around attributes - see two seasons here, and winter season here. 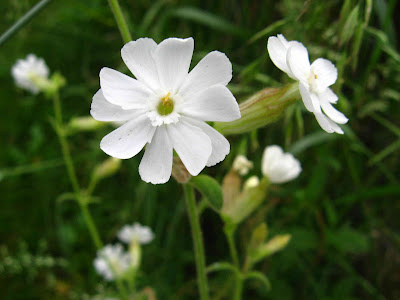 White campion that grows in the edge of the main garden (a former pasture). I first noticed it in 2006. I don't recall seeing it since then.
Posted by Petunia's Gardener at 7:12 AM 3 comments:

Here are some of the bloomers in progress today in my garden. Find out what's blooming around the world by visiting the Gardeners' Bloom Day post at Carol's May Dreams Gardens.

(Please stop by here on Tuesday, though, for some special roses I found blooming this evening and still need to photograph. They are self-caring roses beautifully growing in a fence line!) 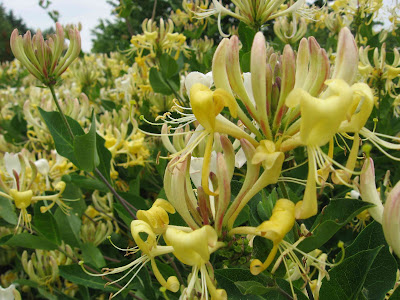 Where is the scratch & sniff button when you need it? This is an amazing year for the honeysuckle growing along our driveway fence. The fragrance really takes off in the evenings. 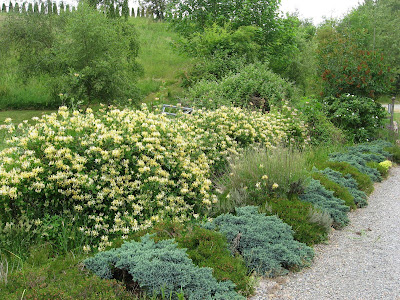 It was just a few thin plants when we moved in 5 years ago. The bees and hummingbirds seem happy with the progress. 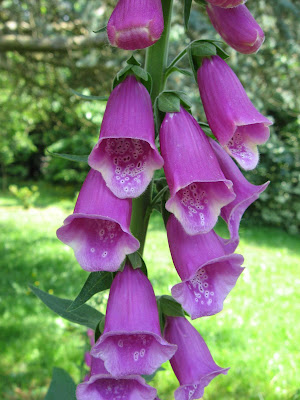 Self-planted foxgloves. That might be some white splashes of dogwood in the background. 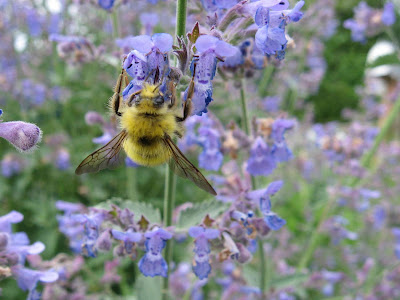 Above, the catmint attracts so many bees, the plant is just a buzz. Funny, today I noticed how yellow these bees are now (vs weeks ago). Perhaps in honor of Carol's Yellow Dedication! 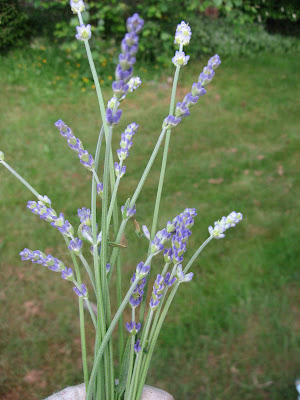 The first of the lavender. These came inside to dry, hung high to keep Maria (aka indoor garden pest) from eating them. It looks to be quite the lavender year, although I lost my Spanish lavender to the winter. 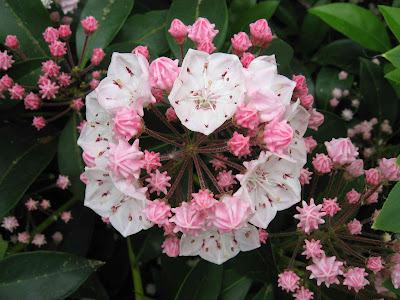 Mountain laurel. It is a wonder, small shrub (at least where it sits on the north side of my house). I love the blossoms before and after opening.
The peas, tomatoes, one cucumber, thyme, sage and the borage, of course, are also blooming.
Thanks for visiting us at Petunia's Garden. And, thanks for hosting, Carol!
~ Paula
Posted by Petunia's Gardener at 11:05 PM 8 comments: 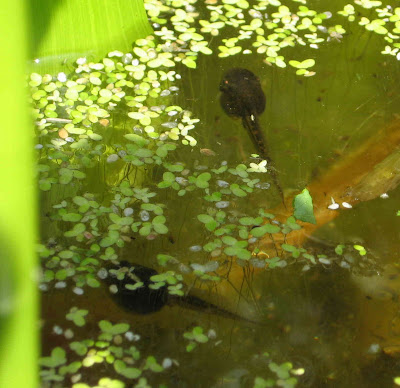 While trimming a tree and pulling weeds around our little garden pond, I noticed movement every time I reached over the pond.

Sure enough - tadpoles! And many of them! The pacific tree frogs started singing in the pond early this spring. They must be so proud (and they are still singing).

See Frog here. He is sitting on a floating ornamental frog in this photo. In addition to this brown version, they can be green. A little frog with a big voice.
Posted by Petunia's Gardener at 9:23 PM 2 comments: 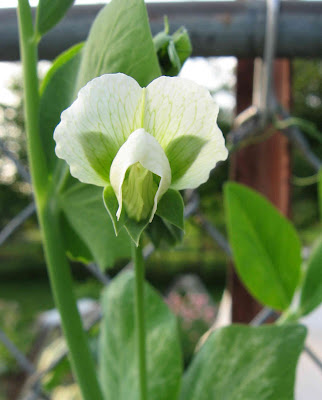 The peas have reached the top of their gate and the blossoms are just starting. I think a gate extension will be in order.


On other critter fronts, Petunia helped me with a little garden weeding tonight! DH has had lots of help from Petunias, but not me (& he doesn't want this help). After a quick appearance, she headed into a patch of lamb's ear at the end of a row. I hope she makes herself comfortable & has many a nice snack of slug.

This is a photo from a few years ago. Today, she was wearing a particularly dark & sleek outfit with yellow stripes. 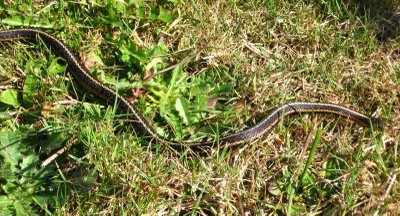 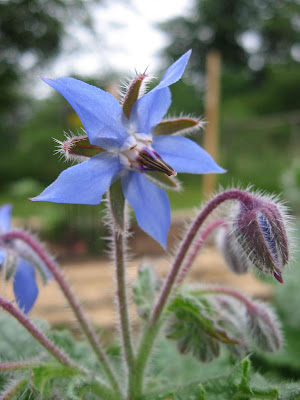 Self-seeded borage plants are now blooming. They are some of the happiest plants. And they make the bees very happy. Slugs don't seem interested in the prickly leaves. They have a cucumber flavor, but I don't care for the prickly leaves in my salad, either. 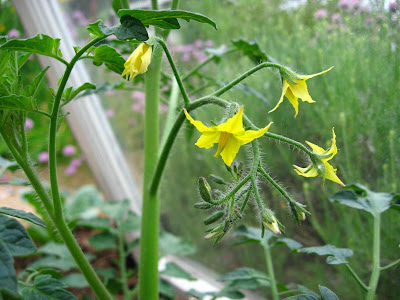 The Sweet Million tomato I purchased is also blooming. Can you see the similarities to the borage flowers? This tomato is under a window frame cloche. The Sungolds, started by seed, are under the covered wagon cloche. They look quite happy but no blossoms yet. 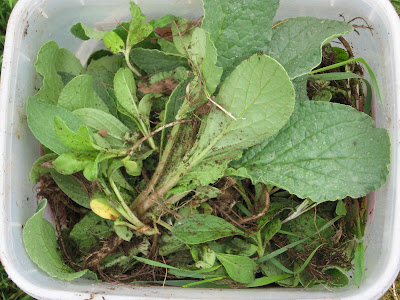 Borage does reseed itself in the garden, especially from any plants that end up standing until winter. Often, I cut them out after they get too large or stop blooming. The seedlings don't take much to remove where they are too thick or in the way. And they made great green additions to the composter.
I love having borage in the garden and even more so because it plants itself in the spring when there are so many other things to do!
Posted by Petunia's Gardener at 11:00 PM 1 comment: