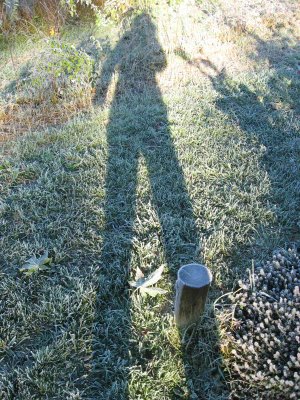 The ghost of the one-handed scarecrow is on the prowl! He might have his sights set on a new HAND from YOUR GARDEN... (Some say lots and lots of garlic will keep him a way.)
Posted by Petunia's Gardener at 1:26 AM 4 comments:

No Doubt About This Frost 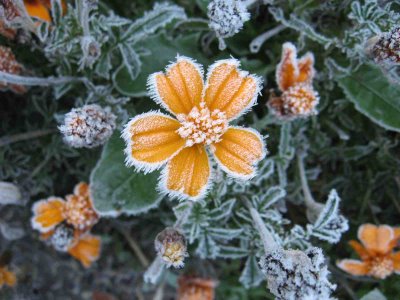 There may have been a light frost earlier in the month, but no question about what happened last night. 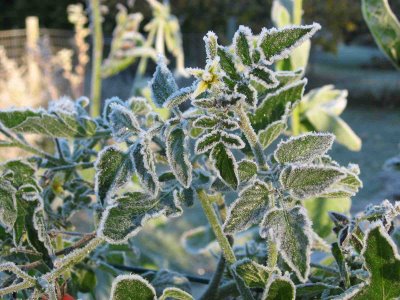 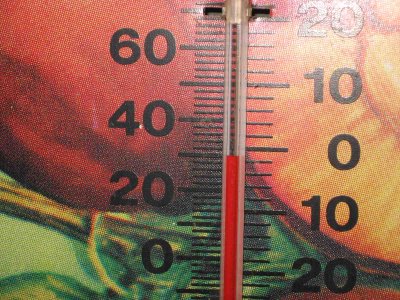 The forecast was for 34 degrees and the clear, cold evening felt like a frost was on the way. Picked most the tomatoes just in case. 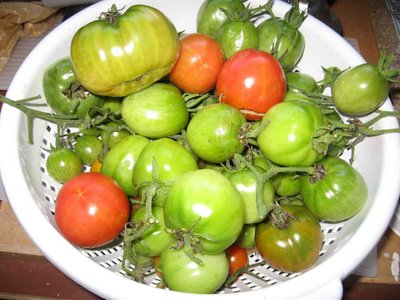 Sunrise in the Nasturtium Universe 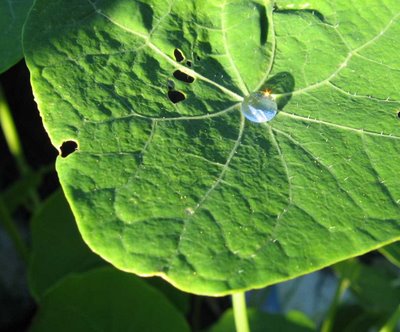 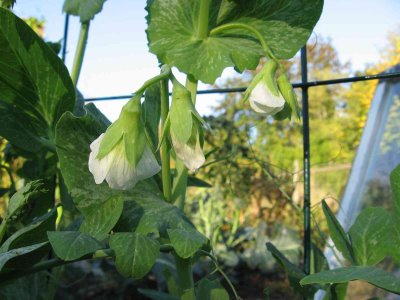 The August 10th planting of snow peas (Oregon Sugar Pod II, I think) are blossoming. I have no idea how they'll do once the frosts start. (Before we mowed them down last weekend, the pumpkin leaves looked like they might have had a light frost, but nothing else seems to have minded.) 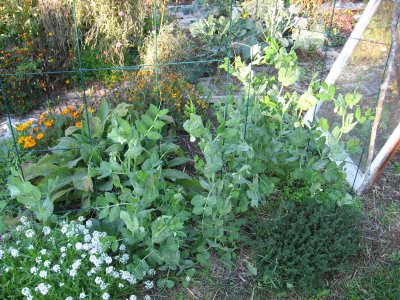 I realized today, however, that this row gets shaded by the barn in the afternoon. In the future, I'll use the rows farther away from the barn for early spring and late fall crops to give them a few more needed hours of sun. The white framed windows are sizing up the area for a possible cold frame over the lettuce and spinach.
Posted by Petunia's Gardener at 8:15 AM 3 comments: 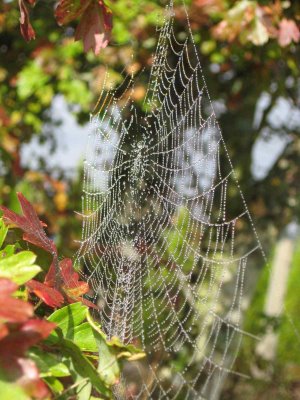 We still visit our hillside seats but often it's too dark when we get home to visit in the evenings. Others must enjoy them when we're not there. Someone's gone and decorated the tree with painted leaves and lots of shiny tinsel.
Posted by Petunia's Gardener at 12:47 PM 3 comments:

Here is some of the sunflower harvest. They were being eaten by the squirrel so I brought them into the barn to dry. 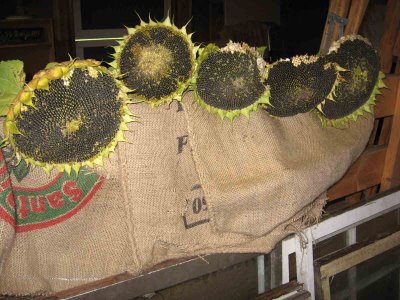 Other critters may find them in here, but I'm watching for signs of munching. 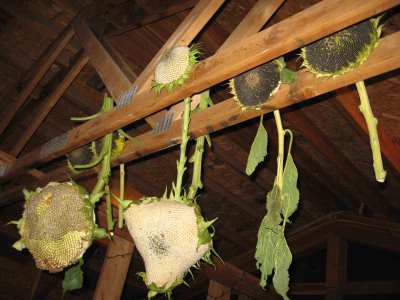 Foggy garden on Oct. 7th, below. The black barrel is a tumbler composter, otherwise, I compost "in place." The tall grassy row between it and the garden has in it a number of native trees & shrubs that started as bare rooted seedlings. We hope to move them to other places on the property soon. Then this will be a lavender row. 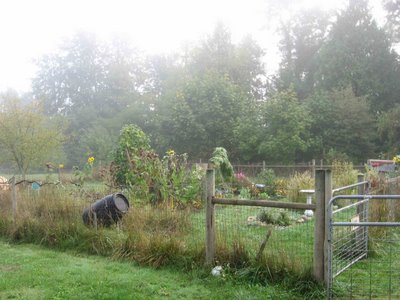 The vines on one side of the bean structure are getting thin and it took the Chickadees & Goldfinches very little time to discover the sunflower heads stuck among the vines. 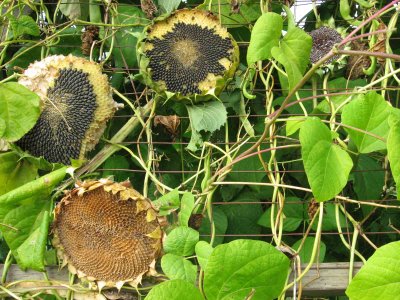 I've been drying flowers and now these leaves in the barn too. These first got a quick rinse before drying and now they are on my table in the house. 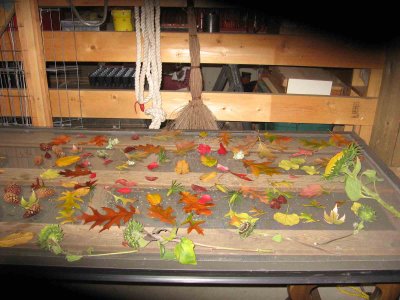 So long girls & thanks for all the poo! 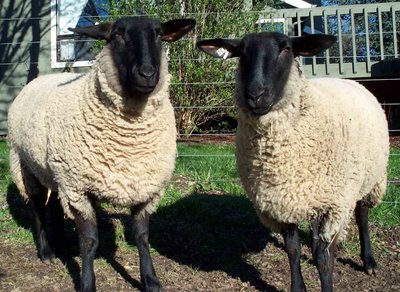 Our pasture guests, Dora and Flora, are off to new pastures (yes, we've been hosting sheep). May be some lambs in their future too. Their owner, a Future Farmers of America student, has graduated high school and started college. She sold the girls to a younger student. Hopefully, they'll enjoy their new pastures. This photo is from the spring.
Here's a link to their spa day & other pics post
And be sure to check out this sheep post

Actually, they well poo'ed the pastures, but sheep poo doesn't accumulate much by itself when they have lots of room to roam (except for by the gate). The straw used in the loafing sheds did, though, and it has been my compost/mulch of choice. I experimented and found wool makes a decent mulch also. The old bales of alfalfa I tried this summer were ok, but alfalfa doesn't seem to break down as well as straw and it's getting a little slimy in the rain.

We'll miss you!
Posted by Petunia's Gardener at 8:16 PM 2 comments: 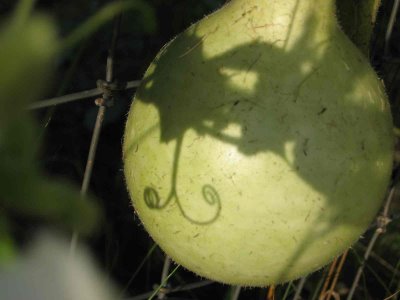 These birdhouse gourds grow pre-decorated on the pumpkin patch fence. Now if they'll just get big enough for the birds to move in.
Posted by Petunia's Gardener at 8:42 PM 2 comments:

O is for Orange

I bid September farewell with visits from both the hummingbird and Petunia! Petunia's younger cousin, Daisy, was also touring with Petunia so maybe next year both will be in residence in the garden. No sign of Herbert since we disturbed him sleeping under the coldframe.

The orange and white striped pumkinettes had already been harvested and most have found homes with friends. These are the volunteers I posted about here and here. I don't know what variety they are. I do see them for sale in the grocery stores now as decorations. 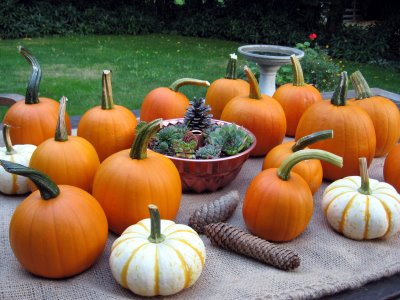 Mildew had overtaken most leaves on the small orange Snackjacks so I harvested the remaining ones yesterday, washed them and put them on this table to dry. (Baking soda & water slowed the mildew on the leaves for a while, but I stopped working at it as it was about time to harvest anyway.) Snackjacks are supposed to be good for cooking, carving and have naked seeds for snacking. We will see. The smallest is under a pound and the largest is 2-3 pounds. Some have already found new homes but above is what I have left. This July post and this August post shows their earlier progress (along with the first striped harvest).

The larger pumpkins are growing in the satellite garden below: Dill's Atlantic-grown from seeds from last year's largest pumpkin, and Wyatt's Wonder - a larger pumpkin that is supposed to keep a nice roundish shape and color. They got a late start this year as we had to get the new area ready, but I'm happy to have any size. (On the left in the picture below, you can see the bean structure in the main garden next door.) 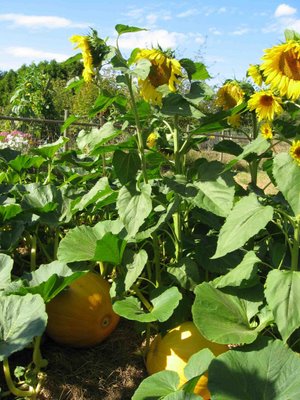 Below is the pumpkin and sunflower patch yesterday. There are some sunflower blooms you cannot see in the picture, but many are now in the maturing seed stage. 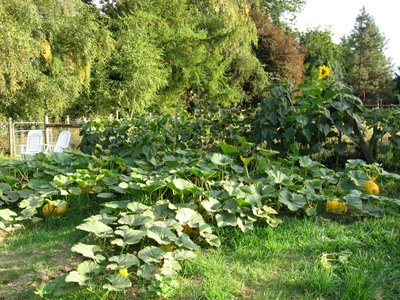 On the left, below, is a Wyatt's and on the right is a Dill's. These don't look much different, but most of the Wyatt's do have a better bottom for sitting, not that I mind the shapes the Dill's take on as they make for unique pumpkin characters (see the link to last year's pumpkin above)! 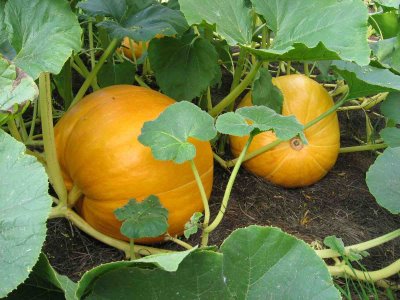