Here are the kitties that keep us company...
Emily when she isn't in the garden.

Nikko with her "did you say treats?" look. (we recently learned that "beets" get the same look)

To keep this as part of the March collection, here are pictures from Sept-Oct 2005, in the garden's first year. Petunia still visited now and then, but I think she spent more time on vacation in the tall grass nearby. 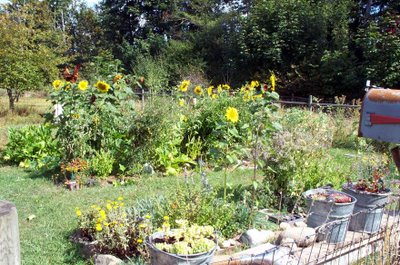 Now we also had tomatoes, peas, zucchini and Romano beans along with the lettuce & herbs. We really enjoyed watching the pumpkins & sunflowers grow. See the handy shelf my DH added to the fence? 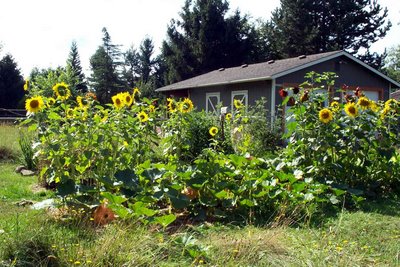 There are pumpkins peeking out above. Below, I could do a whole blog of sunflower pictures. I even like the well eaten one below (late Oct). 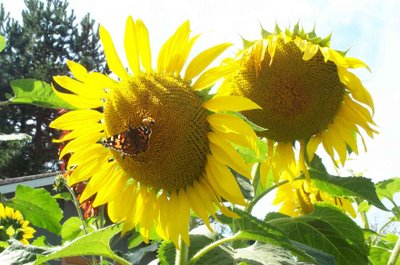 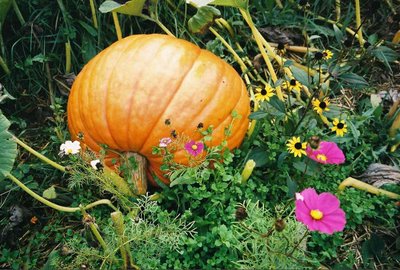 This was the largest of the 4 pumpkins at 88 pounds. We have no idea how this happened. Watch for more appearances by him.
Posted by Petunia's Gardener at 9:18 PM 2 comments: 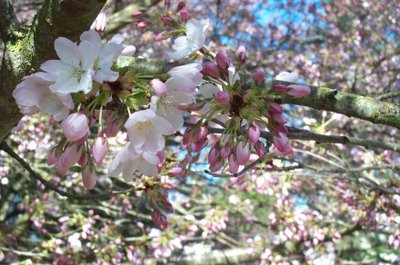 We are fortunate that our house came with three large ornamental cherry trees. After a rainy start yesterday, the sun came out and the flowers really started opening. For weeks, they'll are a joy to see from the kitchen & dining room or from the outside. At least it will look like spring every day while they're blooming.

Basil seedlings have joined the marigolds & cosmos in the starter tray. What will I do with all these sun lovers when they need to be removed from the tray (assuming they live that long)? Suppose I should have thought about their timelines a little better, but one never knows...
Posted by Petunia's Gardener at 8:59 PM 3 comments:

I haven't started seeds like this for years, but I went through my seed collection and picked out some to try. (You can see Emily here ready to come inside.) I had the long tray already, but this is the first time to try the jiffy pellets. I'll be trying the newspaper pots soon too.

These were planted Mar 25. Today, both trays have a few seedlings up (you have to look closely). These in the little tray are Mr. Majestic marigolds. A few cosmos are up in the other tray. Some I planted were collected from things I grew years ago, some are just old. I also have 3 rows of mystery seeds in the long tray! I like to garden by chance and see what happens...
Posted by Petunia's Gardener at 1:39 PM 4 comments:

Frog hasn't been heard in the pond yet. Last night we did hear a lonely guy away from the crowd. He was singing from the blackberry bramble and small rain water ditch. I don't know if it will keep water in it long enough for tadpoles or not. Hope he knows what he's doing!
Posted by Petunia's Gardener at 8:27 PM 2 comments:

The picture in this post might be too much, but here goes. A sunny day can lead to crazy behavior. I decided I needed to rake up some of that sheep doo for the compost. Here are the ever helpful sheep, too. As they are in a large grassy area, it doesn't really accumulate so it didn't take long to get what I could. I was surpised to find something white 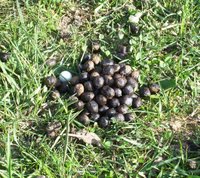 mixed in! Maybe sheep can produce pearls too? It was a funny discovery at the moment, sun silliness, I guess. I doubt one found it (a marble) ate it and passed it on, but I have no idea where it came from. They do try to eat anything. Have I gone too far posting this picture?
Posted by Petunia's Gardener at 8:10 PM 4 comments:

This is where I'll keep my plant list. I cannot find the notebook where I wrote plants & dates last year. This should be better ... as I doubt I'll loose the computer! Note: Vegetables & annual flowers are in the other list.
Herbs

This is where I'll keep the plant list for vegetables & flowers and update throughout the year.

Suitable for a rainy day posting, here are our new additions. Dear Husband picked them up yesterday from a city sponsored sale. Oh, so exciting! They hold 90 gallons each and, this is great... have a low faucet that can be connected to a hose and a higher one to fill a bucket!! Who knew?!

We also have these that we inherited with the barn. They are the dipping type...open the lid and dip in a water can. Not bad until they get low.

Faucets are a wonderful invention. (Yes, some day we'll put them in the old ones also.) Not sure where the new ones will go yet, but they'll have a downspout of their own soon.
Posted by Petunia's Gardener at 6:38 PM 2 comments:

The frogs are singing

Sounds of Spring - The Pacific Tree Frog
Here's a link where you can read more and hear them. 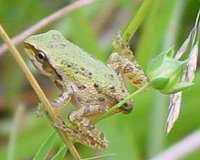 These little guys are now singing up a storm near any body of water, usually with hundreds of their friends. They are loud, but I like to hear them. Last year, one lonely guy set up shop in late spring in the little garden pond we inherited with our house and sang his heart out. Sure enough, one day I'm out there scooping out the excess moss and leaves and I notice the wiggling little tadpoles! That got me out of pond duty for a while. Later, I did see one of the young frogs in the pond.

So now I wait... Will any of the frogs return to their pond this year?
Posted by Petunia's Gardener at 8:05 PM No comments:

Putter: to busy oneself without needing to get much done. 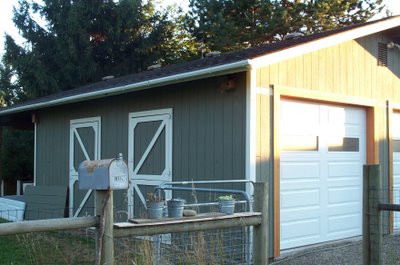 This is the "puttering barn." The 'garden shed' is the back part of the barn. The outside stall on the left side of the picture (sort of blocked off from the sheep in this picture) is the outside potting area. Just inside from the potting area is the rest of the garden shed. We're still debating the use of the area inside the big doors! The mailbox on the fence just holds misc. garden supplies.

The inside 'garden shed' has been shared with the sheep supplies for the winter. A white board? It came from a local surplus store and seemed handy for garden planning. It holds sheep care notes right now! To the right of the hanging tools is the door back to the outside potting area. 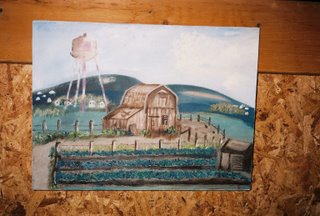 Here is more catch-up on the garden's progress in its first year. We were eating leaf lettuce and herb salads at this point in early June 2005. 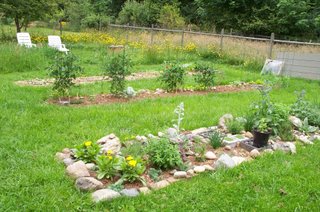 Emily adopted us in June 2005. She keeps us company in the garden and guards the catnip. If only she'd go after the mole(s)! 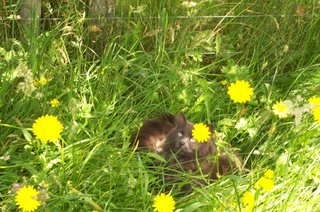 The pumpkins and zucchini are starting to spread out below. We added peas to our salads and enjoyed watching the bees attack the borage flowers. 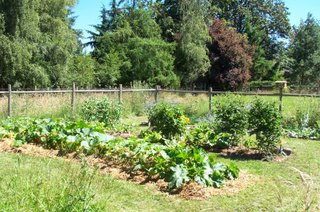 Below, you can see the sunflowers growing above the pumpkins. Still no tomatoes, but we had zucchini for the salads. 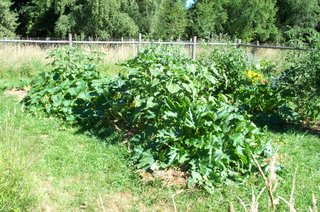 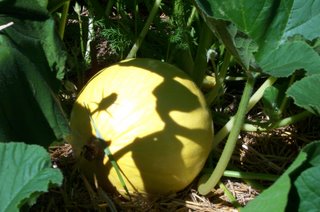 We are hosting two sheep for a Future Farmers of America student. She visits each day to care for them. These pictures were after their "spa day" last summer (a bath, before a field trip they were going on). Needless to say, used sheep straw has been our mulch of choice for the garden so far! 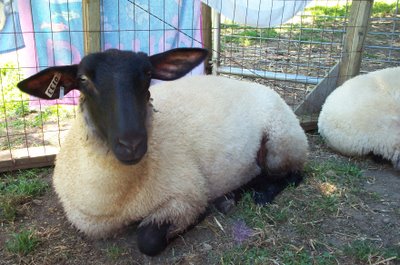 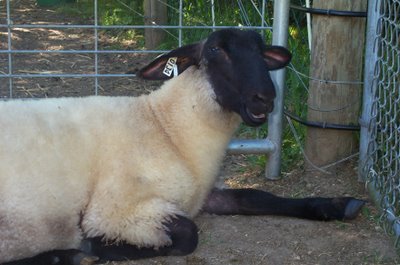 Below is a current picture - March 2006. These girls just wouldn't pose for the picture, but you get the idea of their current size and wool coat. I guess eating grass is the normal pose for them! 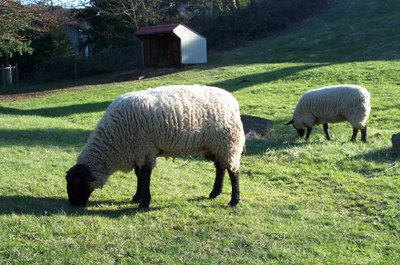 Besides eating grass, they also enjoy knocking off any rock or other item placed on this bench. All of these items will be knocked off in a day or two. 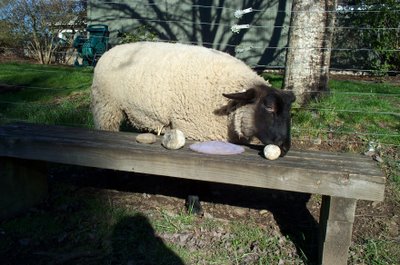 Posted by Petunia's Gardener at 11:05 PM No comments: 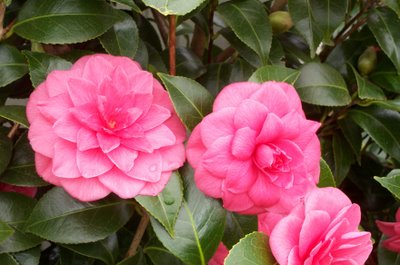 While I'm not finished catching up with the garden development, here is an update from today. Even though it snowed two days ago, today was beautiful and the camellia shrubs decided to start blooming. Many bees were visiting the heather and they should soon have more flowers to choose from.
Posted by Petunia's Gardener at 6:18 PM 2 comments:

After moving to our current location in 2004, this is how the garden space started developing in 2005. It's located in a former alpaca pasture, shown here on a frosty January morning. 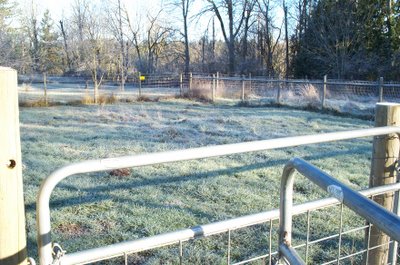 In early May, we had these three rows and Petuntia had taken up residence under the 'weed blocking' board in the third row (with an occasional visit from Herbert). By this time, the first row had been planted with herbs and other plants we had brought from our prior house and had temporarily stuck in a rough flower bed after the move. 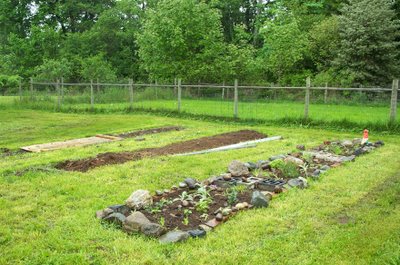 In the row on the left below... I almost regret giving the zucchini seeds the extra benefit of the old skylight. I thinned them several times and still had too many! Later, the pumpkins and sunflowers will be in this row also. The row on the right has tomatoes, mixed with other things, and lettuce and peas on the far end. You know all that grass around the beds cannot be a good thing! That will be our 2006 project.

Posted by Petunia's Gardener at 4:35 PM 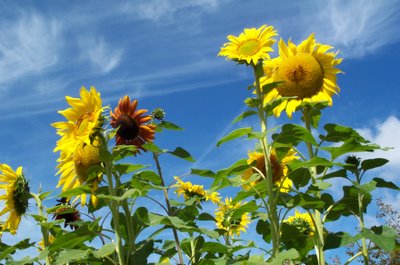 On a cold day in March, this picture is a good reminder that there are warm, sunny days ahead and Petunia will soon be back in the garden! Our purpose with this space is to share a view of our world with those who are far away, delay doing any of those other things on the 'to-do' list and to have a little fun. Petunia's gardener can use any tips you have to share also!
Posted by Petunia's Gardener at 7:57 PM No comments: